UPDATE DECEMBER 2018: Censure by PC Magazine. Award-winning John Dvorak, the 30-year employee and writer at PC Magazine, was fired September 20, 2018, shortly after publishing his opinion piece noting the lack of health testing for 5G. Two weeks later his article was removed from PC Magazine’s website and the link was replaced with an article that is supportive of 5G. Dvorak’s article was returned to PC magazine after complaints were lodged, but the reposted article was placed in a hard to find archive location, not at its original link.

[UPDATE APRIL 2019 – It happened again. Censure by WIRED editors. A WIRED magazine article on the health effects of 5G was archived and replaced with an article uncritical of the race to 5G. Here’s the link.]

We still haven’t found it on PC Magazine, but here is a repost of the article by a website called Scientists for Wired Tech. Here is a case of censure of an opinion piece by an established journalist. Public questioning of the 5G rollout is being quashed. This action has badly tarnished PC Magazine’s reputation. (http://adam.curry.com/art/1538252864_suTfkGD2.html) Luckily, we had already excerpted some direct quotes from the article before it was removed from PC Magazine’s archives. A copy of the full article is also reposted at the bottom of this page

Using the telephone poles that run through our yards, telcomm companies are installing potentially harmful 5G antennas on every block.  Highly respected tech authority PC Magazine warns of the health risks in their August 22, 2018 issue titled, THE PROBLEM WITH 5G:

“The technology might be the problem, but even worse for the companies behind it is the perception that 5G is already unsafe before they even get it on a single pole.

Because the industry is too cheap to study the health effects of the technology itself, it lets this sort of product out the door despite the fact that it has already been weaponized by the military. These frequencies are so poor at travelling long distances, they need a transmitter on nearly every telephone pole and light pole to make 5G work.

As usual, the mostly arrogant (or naïve) technology industry is caught flat-footed at the negative reaction. It always figures that the stupid public will buy into anything new and jazzy if it makes their handheld phone seem a little faster, and even pay more for the privilege of the upgrade.

One of the ways the industry has made this all work in the past is by quick implementation followed by a “Hey look it works! Nobody was killed” approach. That cannot happen with true 5G, which needs all these mini-towers all over the place. That leaves plenty more time for the public to get a clue and be freaked out.”

What makes 5G different is that it’s a shorter range focused microwave transmission. 5G is rolling out rapidly as a dubious ‘federal infrastructure improvement’ project. The Telecommunications Act of 1986 protects telcomm companies from liability for health effects from waves that fall into the prescribed ‘safe range’ that is not being health tested to verify it is safe. Yes–that’s the protection the FCC (Federal Communications Commission) gave to the telcomm corporations.

Don’t wait for one of the 5G mini towers to show up in your back or front yard before you take action.  Learn what effects EMF have on DNA, blood and water in biological systems like the human body. Children, sperm and eggs are very susceptible to damage from EMF. Get the #1 EMF protection proven in blood and farm testing to work at our EMF Protection Shop.  For a limited use coupon code CME and save 10% on devices not already marked on sale.

Yours for safer tomorrow,
Ken and Elizabeth
CoolestTechEver.com 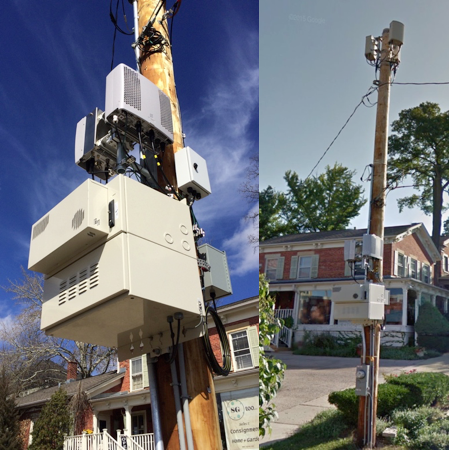