Cell Phones and Colorectal Cancer Soaring in Young Adults; Are Smartphones in the Mix?

Editor’s Note: This reprinted article originally appeared in Microwave News and can be found here. We already have proof that men who keep a phone in their pocket are experiencing low sperm count and motility–something discovered by the fertility experts. We already have indisputable proof that women that carry their phone in their bra have caused cancer in that breast. And then there are the incidents of gliomas–inoperable brain cancers–associated with the side of the head where the patient used their phone, like Senator John McCain.

De-Kun Li wants to change the conversation on cell phones and cancer. Li, a senior epidemiologist and veteran EMF researcher, believes that brain tumors have been getting too much attention at the expense of other types of cancer, notably colorectal cancer.

Efforts to reduce colon and rectal cancers have been a striking success story for those over 50 years old. Incidence among older Americans declined 32% between 2000 and 2013, due largely to better screening. But the story for young adults is very different. Those born around 1990 now face four times the risk of developing rectal cancer and twice the risk of colon cancer in their 20s, compared to those born around 1950, according to the American Cancer Society. (Rates among young adults are still relatively low; see graphs below.) 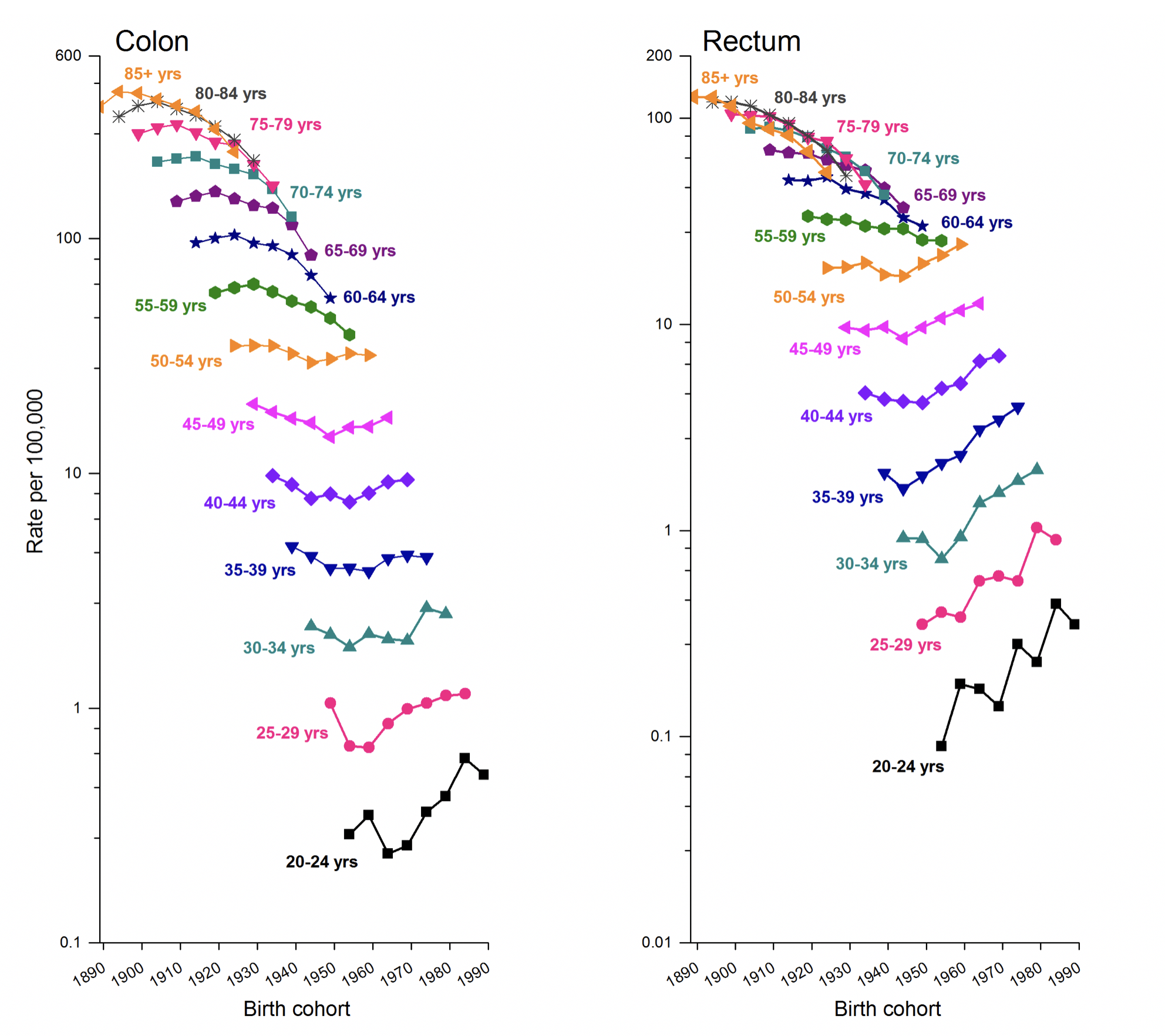 According to the National Cancer Institute’s most recent annual report, released last week, colorectal cancer is the most common cancer among men between the age of 20 and 49.

“No one can explain this apparent contradiction,” Li told Microwave News. Known risk factors for colorectal cancer include obesity, an unhealthy diet and lack of physical activity, but Li doesn’t think they can resolve the paradox. “If anything,” he said, “younger generations are more health conscious with better diets.”

Li offers an alternative hypothesis: Young people’s habit of carrying their cell phones in the front or back pockets of their jeans. “When placed in trouser pockets, the phones are in the vicinity of the rectum and the distal colon and these are the sites of the largest increases in cancer,” he says.

RF Exposures from Phones on Standby

Li’s hypothesis assumes that phones continue to emit RF radiation when placed in a pocket. They do, especially smartphones, but exposures are difficult to estimate.

When not in use, phones quickly go to standby mode, and RF transmissions are greatly reduced. Yet, the phone stays active because the system must always know its location in order for the network to direct calls or texts to the nearest cell tower for delivery.

A Swedish-Danish study, published in 2012, found that phones on standby were only in touch with the local base station once every two-to-five hours —and then for just a few seconds. “The exposure in standby mode can be considered negligible,” concluded Kjell Hansson Mild of Umeå University, the lead author of the study. Jørgen Bach Andersen of Aalborg University was a coathour.

Today, Mild sees things differently because smartphones —which were still relatively new when he was working on his study— contact the network much more frequently, if only to update their location. Mild wants research. “We need more measurements and dosimetry on how a phone radiates in a pocket,” Mild said in an interview, adding that, “I keep my phone in my briefcase and when I turn it on, I use a hands-free set.”

When a phone is in a pocket, the separation distance from the body is less than that recommended by Om Gandhi, Mild said. Gandhi, a professor emeritus at the University of Utah, has published a stream of papers on cell phone exposures, estimated by measurements and calculations (here’s one from 2002).

In an e-mail exchange, Gandhi noted that, in compliance tests, cell phones are placed about 10 mm away from the body. Without that spacing —for instance, when a phone is in a pocket next to the body— exposure (SAR) would be about twice that cited in safety specifications. The title of Gandhi’s most recent paper, posted in April by the IEEE, the electrical engineering society, spells out the problem: “Microwave Emissions from Cell Phones Exceed Safety Limits in Europe and the U.S. When Touching the Body.”

In his paper, Mild highlighted that exposures go up if a phone on standby is in motion:

“[W]hen a person carries the phone in a pocket and moves in a city the phone updates when entering a new base station area, and this can be as often as once every few minutes depending if one is in [a] city center or suburban area. For [those] periodic updates the GSM phones operate at full power.”

A later investigation by Damiano Urbinello and Martin Röösli of the University of Basel showed that exposures are even more significant when a phone is in a moving vehicle, whether a car, train or bus.¹ They predicted that smartphones would likely increase exposures because of their need for “regular location updates.”

There was much more to learn. Urbinello and Röösli wrote:

“There is an urgent need to evaluate more thoroughly how personal RF-EMF exposure is affected by one’s own phone in standby mode.”

That was six years ago. There’s been little, if any, follow-up since then. “I am not aware of much further research,” Röösli told Microwave News.

Phones in Pockets Below the Waist

Do young adults keep their phones in their pockets? Li points to a 2017 survey of Australian women, aged 15 to 40, by Mary Redmayne, who found that a majority routinely put their phones in a pocket below the waist. Importantly, the youngest women do this the most. She also reported that 96% of the women keep their phones on standby during the day; at night it’s 83%.

In an e-mail, Redmayne said that she has no information about where young men keep their phones, nor is she aware of anyone who had looked into it.

Colorectal Rates Among the Young Rising in Many Countries

Increases of colorectal cancer among the young are being reported around the world, not just in the U.S. — including many European countries, as well as Australia and New Zealand. Just a few weeks ago, IARC reported that, between 2008 and 2015, the incidence of colon cancer among 20-29-year-olds increased by about 18% per year in Denmark, 8% in Australia and 4% in Ireland. While the risk declined in Canada and Norway, the rate of rectal cancer in those countries rose by 3.5% and 10.6% per year, respectively.

Writing in The Lancet – Gastroenterology & Hepatology, the IARC team advises:

“Although the incidence of colorectal cancer in adults younger than 50 years remains low compared with that in older age groups, our findings are of concern and highlight the need for action to counteract the rising burden of disease in younger cohorts.”

“My hypothesis could be proven wrong,” Li concedes, “but this potential explanation is more plausible than any other current hypotheses out there.” People should be made aware of the possible risks, he said, so that young adults can decide whether to take precautions and colorectal cancer researchers can weigh the merits of the case.

Over the last 20 years, Li, who is with Kaiser Permanente in Oakland, CA, has completed a number of groundbreaking studies on the effects of power-frequency EMFs. In 2001, he reported that women faced up to a sixfold increased risk of miscarriages when exposed to magnetic fields above 16 mG (see MWN, M/J01 and J/F02). That early work has been supported by others and there are now at least seven studies that point to an EMF–miscarriage risk.

In other projects, Li has shown that magnetic fields can affect the quality of human sperm and that prenatal EMF exposure can lead to childhood asthma and obesity.

1. Another finding: Standby exposures from UMTS (3G) phones were “considerably lower” than those from GSM (2G) phones.